We Are United In Fighting Against The Epidemic

The outbreak is ruthless. Medical staff is reluctant to reunite, leave their wives and mothers, abandon their sons and leave their homes, risking their lives. More than 50 medical teams and more than 6,000 medical workers are helping Wuhan … one by one, “petitions”, one by one with loved ones Letters of condolences, life-saving and wounded hearts, and the figures of angels in white going backward made countless people tearful.

They were not afraid of life and death, but bravely and firmly moved to the battlefield to fight the epidemic and save lives. “The epidemic is endless and we are not dispersed.” The words of a post-90s nurse in the epidemic “Red Zone” moved countless people. The current disaster is not shrinking, and the harder it is, the more we move forward. They are the most beautiful “retrograde” in the new era, and they are the most respectable heroes of our time.

The epidemic is severe and there is a shortage of supplies. Before the disaster, regardless of color, race, or borders. Caring people and volunteers donated materials in a timely manner. Foreign students tried their best to send protective equipment to the country. Foreign friends also extended a helping hand to China, sending batches of medical supplies to Hubei.

This battle without gunpowder is still being persevered. Despite the hardships, we are all committed to the city. In addition to the staff on the front line of the “War Epidemic”, all kinds of people in all walks of life have contributed their own strength.

There is an old man of 84 years old. He called on people: “Don’t go to Wuhan without special circumstances.” However, he has already rushed to the forefront to learn about the epidemic on the ground. “My motivation comes from the threat to human life from the disease.” After the outbreak, the old man kept walking around Guangzhou and Hubei to interpret the latest situation for the public. 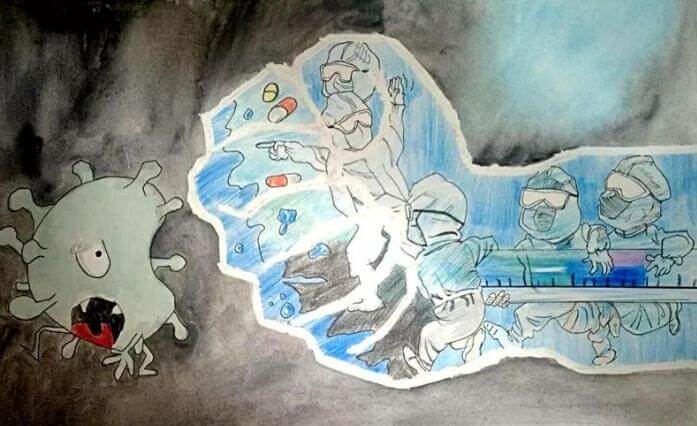 In fact, not only Academician Zhong Nanshan, but also many doctors, nurses, and railway workers, they are still on the front line. They put themselves down to support reunion and bright lights.

There are also big companies and entrepreneurs who have extended a helping hand to Wuhan, donated money and materials, and made great contributions to this “war epidemic.” Australian Chinese, Japanese, Koreans and other countries all over the world have reached out to China, donated mask materials and jointly developed vaccines. In addition to these people, ordinary people are also actively participating in them. They also do their best to leave a warm heart.

The camera of the Wuhan Public Security Bureau recorded a scene of warming heart: An old dad, about seventy years old, holding a cane, leaning on his body, hobbled, and put a tote bag with a protective mask on the door of the duty room of Jiufeng Police Station. Turn around and leave. When the staff member on duty rushed out for questioning, the old father had already boarded and left …

This kind of warmth happened more than once. Qianqiu Police Station has received 850 masks sent by two people; the young girl sent 45 pairs of goggles to the triage station, leaving a note “safe, come on”; when a police station in Anhui Province was on duty, a young man sent 500 A mask, then fled, leaving the sentence: “You work hard.”

Then they “put aside and fled”, what they put down was care, and what remained was moved. These are all from the goodwill of ordinary citizens. They dedicate what they can provide directly to the people who need it most. They do not ask for returns. They are the trust of front-line workers and the active participation in this battle.

This is a “common war epidemic” that we need to face together! We need us to work together to overcome it! These actions are all the most beautiful in this “war epidemic”.

Epidemic prevention and control is a fierce battle at stake without smoke. For a while, there was a protracted battle in the nationwide battle against the epidemic. “Crossing the door is killing each other, and gathering is self-seeking”, “This year ’s New Year is not the door, the enemy is the door, the enemy does not open the door” … this earthy “earth smell” slogan banner, like a mudslide “relentless” “But it is very hardcore, and has achieved the purpose of propaganda prevention.

In order to prevent the epidemic from spreading and effectively cut off the transmission route, village party cadres and volunteers set up checkpoints at the entrance to the village. They are not afraid of the cold, hard of hardships, and are on duty day and night to investigate external personnel. As an ordinary person, we cannot rush to the forefront, but we can do it: stay at home without going out, wear a mask, wash your hands frequently, be more ventilated, do not believe in rumors, and do not spread rumors.